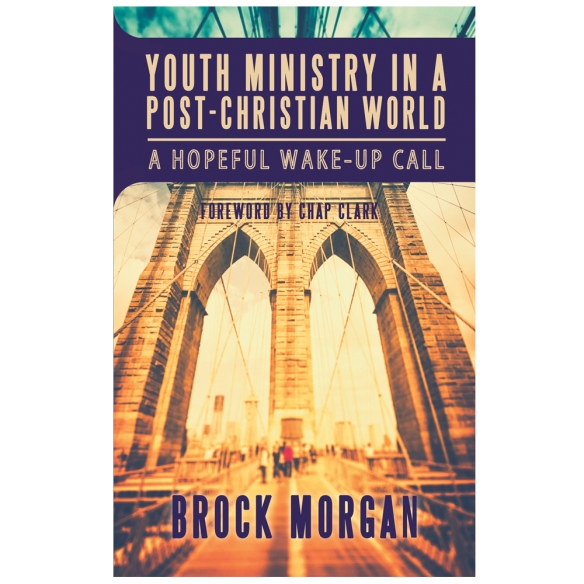 Let me begin by saying I really, really appreciate this book and applaud Brock for writing it and the good folk at The Youth Cartel for publishing it.

This book should be on the shelf of all youth workers in the U.S and I think Europe as well…but more on that later.

He was very helpful during my decision and transition to leave youth ministry in the US and experiment with it here in France.

I remember Brock sharing about his call to Trinity Church in Greenwich and my honest wondering how he would make the transition from the glitz and glamour of youth ministry in Southern California to the challenging world of postmodernism and post-Christian world in the Northeast.  I had been serving as youth pastor for 10 years in the neighboring town of Bedford, NY and so understood full well the implications of postmodernism in society, the church, and especially with student ministry.

Many are called and few make it.

Brock transitioned well.  He gets it.

You may not agree with everything he says in the book and I would bet it is because your ministry context is vastly different from his in the metro NYC über wealthy, highly intelligent and often antagonist culture riddled with cynicism, skepticism and secularism.

Because Brock is truly a practitioner of youth ministry, he unpacks the real issues facing today’s post-Christian teenagers better than anyone else I have read.  He really understands his context including the challenges facing the message of Christianity..or at least the image of Christianity.

You may think your environment is nothing like Brock’s and you may be correct...for now

Statistics and social experts correctly predicted that the Northeast of the United States would follow the trends in Europe.  This has already happened and will eventually sweep through the rest of the United States, hitting urban areas and both Coasts first before merging in the middle and …wait for it…actually impacting the “Bible Belt” of America’s heartland.

Whether you like it or not, we will be living in an ever-increasing post-Christian society.

Here in Europe, and especially in France, Christendom has long since evaporated and I would argue that for the best 25+ years students and churches have been experiencing what Brock describes is now happening in his area.

So, if you live in the Northeast, the first few chapters of the book you will understand because it is the reality in which you are serving. These chapters will be crucial for those trying to discern where society and culture is heading in the next 5-10 years.

For me, the chapter “The Way Forward: Response to a post-christian world” is paramount.

Of course he unpacks each one with stories and strong theological arguments while remaining unwavering in his focus on Christ and passion to see students embrace and encounter Jesus.

In the chapter “A New of Mission”, Brock shares about moving away from an agenda of conversion to full engagement in the community. “We don’t serve to get people saved. We serve because we are saved.”

This indeed is a radical paradigm shift, seeing ourselves as ambassadors of God’s grace and blessing to the world in which we live.

In the chapter “A New Measurement for Success” Brock brilliantly and carefully attacks the numbers game of youth ministry in favor of relational and spiritual development as measures of a healthy youth ministry (and youth pastor) “My relationship with Jesus is my ministry”, and we are challenged and called to truly live out our faith with our students in honesty, transparency, authenticity and grace.

Brock Morgan has a challenging task and he approaches it as a missionary. Brock stands outside of the post-christian culture and observes as a missiologist and then delves into that world with optimism and hope.

From the stories I hear, God’s Spirit is truly moving among his church and youth ministry in Greenwich.

After finishing the book, a few questions linger.

I wonder if this approach is still valid for a society already gone through this shift away from Christianity.  Though hard to disagree with the movements in England, in France and other parts in Europe the history of the Church is so sullen people have lost faith. Whereas in the U.K and U.S, the church and state have not really been separated, a nation like France nationally split from the Church and makes it almost illegal to display one’s personal faith publicly.

I also wonder what youth ministry will look like as the next generation rises up in leadership, a generation itself raised in post-Christian values and worldview.

Around 10 years younger than Brock, I find myself actually on the cusp of a generational divide.  While others approach youth ministry from the vantage point of missiology, the time is coming when words like “progressive” and “post-modern” will define not only students but leaders as well.

What will faithfulness to God’s work in youth ministry need to look like for those who honestly question traditional beliefs and practices while embracing skepticism, tolerance, pluralism, inter-faith partnerships, social equality in all forms, and Biblical “openness”?

It is still to been seen how post-christian youth workers can embody a new kind of youth ministry.

That book has yet to be written……

From October 21 to November 3 over 100 students converge upon Luxembourg City for the annual AICEME Youth Conference.  Members from our ACP lycée group will be taking the famous high-speed TGV train to be amongst the scores of teenagers also traveling by plane or train for this weekend getaway in the tiny country of Luxembourg.

Our host is All Nations Church and they will be celebrating their 10th anniversary the weekend of our arrival.  http://www.allnationschurch.lu/en/

Each year, the Association of Churches in Europe and the Middle East (AICEME) hosts a number of gatherings and conferences including the Pastors and Spouse conference, Youth Pastors conference and also this Youth Conference.

You can visit the website to learn more  http://www.aiceme.net

AICEME is an association of Christian congregations, bearing witness to the Gospel and serving Jesus Christ among English-speaking people throughout Europe and the Middle East.  AICEME member churches are diverse in style, tradition, denominational affiliation, and membership.  Many of the churches were started by English-speaking Christians from North America. Today, the association includes believers from 6 continents who are business people, expatriates, diplomats, refugees, missionaries, and students.

What brings everyone together is the English language and  love for Christ.

There are approximately twenty-eight member churches in this association and each church has middle school and high school students involved.  While some churches are not yet able to hire a youth pastor or have an official “youth group”, AICEME creates an opportunity once a year for all churches to send students to an international conference where they can make new friends, be inspired in their faith and equipped as a follower of Jesus.

What I have discovered is that these Third-Culture students find commonality and solidarity with one another and instantly forge friendships.  Why?  Party due to the fact that they are all accustomed to transitions and having to open up to new students on a regular basis.  Many of these churches are full of transient families and, like my church here in Paris, have learned to become a welcoming community for all, even if only traveling through for six months.

Another reason why students love this conference is that they understand each other.  Many are from multi-cultural families, speak multiple languages, have dual citizenship, feel 100% comfortable at an airport by age twelve,  and struggle to answer the often posed question “Where are you from?”

So, once a year we gather from across Europe to support and encourage one another.  This year the 2013 AICEME Youth Conference is themed THRIVE  Real faith: Real life

Youth pastors from various churches will lead the main sessions and seminars and we have city-wide treasure hunt and Serve the City opportunity to focus our time on having fun together, exploring this new city and serving those in need.

I am honored to be part of a church that supports this association and believes in the importance of our students learning, worshipping, serving, and living alongside each other as we embrace our unity in diversity as followers of Christ.

*taken from the blog http://whyismarko.com/2013/open-paris-in-a-word/

This last weekend, Adam and i were in paris for The Youth Cartel‘s event called Open Paris. these “Open” events have been adam’s birth-baby, shaped by this short manifesto of vision. but each Open event is completely unique, since there’s a high level of ownership given away to the local organizing team.

i’ll admit something here: while i thought the vision of doing one of these in paris was fun, i was a tad skeptical that it would actually work.

50 youth workers from 7 or 8 countries came. by most event planning metrics, that’s not a win. for this event, it was totally a win. the event had a relational dynamic as a result. we learned from each other; but we also hung out together. like: i have new youth worker friends now who live in germany and holland and england and france.

so, Open Paris in 5 words: LOCATION WAS HARD TO BEAT

Open Paris in 4 words: OUR HOST WAS AMAZING

* a thin place, often used to describe a spiritual thin place. in this case, a place where the kingdom of god and the world of humans overlapped.